The Taylor lab has published a new study out now in the Journal of Neuroscience Research. Here we used a couple of really powerful mouse models to examine why kappa opioid receptor agonists work less well in females. Kappa agonists are currently being developed as new, non-addicting treatments for chronic pain and itch. Understanding how they work in males and females is critical if they are to be tested in human clinical trials.

Kappa opioid receptor (KOR) agonists are known to have a notable sex difference; however, the biological basis for this sex difference remained elusive. Previous work relying on surgical or chemical manipulation of gonadal hormones have produced conflicting results on the relative contribution of gonadal hormones to the KOR sex difference.
Here, we were able to show that sex chromosomes (and particularly the X chromosome) contribute significantly to the KOR sex difference. This discovery carries meaningful
clinical implications given KOR agonists are currently being developed as novel analgesics, and women are significantly more likely to require pain treatments in their lifetime.

Here, we use a mouse model (four core genotypes) where by we manipulate the activity of the testes-determining gene, SRY (the gene found on the Y chromosome responsible for testes development in males). Removal of the SRY gene from the Y chromosome generates XY animals without testes. In fact, in absence of the SRY gene, mice develop ovaries and are gonadally “female” (they look and act like females, and are housed with normal XX mice). Conversely, if we take the SRY gene and insert it in the genome of an XX mouse, this generates XX mice that develop testes and are gonadally “male”. Comparing XX “males” (i.e. testes and testosterone) and “females” with XY males and “females” allows us to quickly determine whether a specific behavior or trait is mediated by either sex chromosomes or hormones (or both!). Here, we found that kappa opioid receptor analgesia is driven largely by the makeup of sex chromosomes, rather than gonadal hormones. Mice with 2X chromosomes were less responsive to kappa opioid receptor analgesia than mice with the Y chromosome, independent whether they had male or female gonads.

These are very exciting findings that lead to many more questions. Which genes on the X chromosome are responsible? Could we temporarily make females more like males (genetically speaking) to help improve kappa analgesia in the clinic? These are ongoing experiments in our lab – so stay tuned!

You can find the paper on Pubmed or download here.

Our graduate student Zoë spear-headed a recent review examining the relationship between the gut microbiome, neuroinflammation, and chronic pain. Here, she considers the emerging evidence that communication between the gut microbiome and microglia drives the chronicity of pain. She reviews the current literature that supports a link between gut bacteria and central inflammation and discusses the potential mechanisms by which the gut microbiome and microglia communicate to influence the chronicity and perception of pain. Finally, she highlights gaps in knowledge, and discusses the implications for targeting gut health to improve pain outcomes in chronic pain populations. 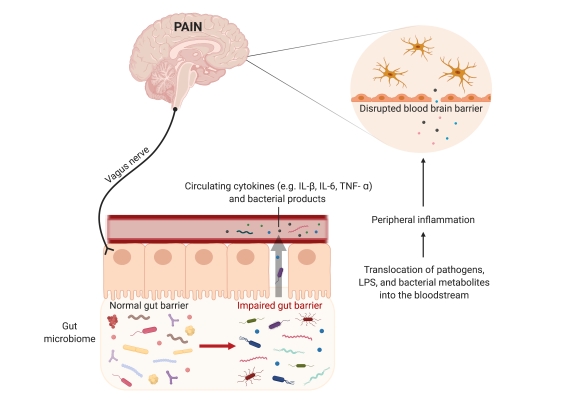 Nature Outlook’s most recent issue is all on the opioid crisis. Here,

Dr. Taylor discusses her work on opioids and the gut microbiome (article here).

Check out the full issue here.

The Taylor Lab is participating in a couple upcoming public lectures. These are great opportunities for the community to learn about our work in a fun, engaging environment. 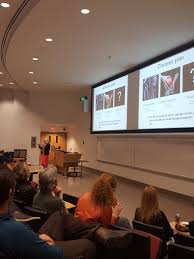 This lecture is free and happens October 30th at 6pm in the Allard Lecture Hall in the Katz Building.

The Taylor lab will also be represented at the Telus World of Science Dark Matters Event. This is in adult-only event with a DJ, open bar, and local guest experts with interactive displays. This years theme is “Science of Drugs”, and the Taylor lab will be talking about how drugs interact with the brain and how we study them in the lab.

The event is October 3rd. Get your tickets here! 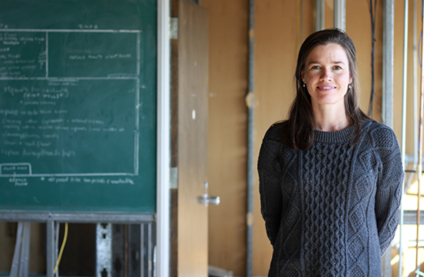 The Taylor lab was recently awarded a Canadian Foundation for Innovation JELF award that will help establish a cutting edge Pain and Addiction Laboratory at the University of Alberta.

This award will be used to purchase equipment for an advanced rodent behavioural testing facility, as well as imaging and molecular tools that will help us investigate underlying mechanisms contributing to chronic pain and opioid addiction.

Our lab was recently profiled in Folio. You can read it here.

We wrote a commentary on the recent paper looking at learned conditioned pain sensitivity in male and females (Martin et al). This study describes a novel paradigm to investigate the intersection between memory, pain, and stress, and demonstrates that placing mice or humans in an environment that was previously associated with pain can lead to heightened sensitivity in the absence of a painful stimulus. We comment on the implications of these results with regards to pain in men and women.

Well done, Zoe, a first-year Taylor lab Master’s student, for taking the lead on this effort. You can read the full commentary here.

Our new study is out now in the journal Neuropsychopharmacology. Here we examined the impact of opioids (morphine) on the community of symbiotic bacteria that reside in your gut (your gut microbiome). You can read more about this work in the recent news releases out

We went on to show that these changes in the gut microbiome are causally related to many of the symptoms of opioid dependence. We did this by treating control mice with a cocktail of oral antibiotics in order to deplete their own gut microbiome. We then recolonized their gut with fecal samples isolated from animals treated with intermittent

The results from this study are important because it suggests strategies that restore or manipulate the gut microbiome may be effective therapies for treating those suffering from opioid addiction. In particular, strategies to improve gut health during periods of opioid withdrawal may improve abstinence rates amongst those suffering from addiction.

Despite the lack of activity on this site, the Taylor lab is in full swing. We have an animal protocol, reagents, and fridges! We had two new graduate students join the lab in 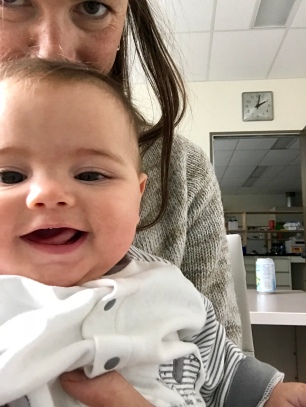 September (updates to come soon), along with several undergraduate researchers.

Last April, baby Willa made her appearance and took the honour as the the youngest Taylor lab member. While she’s a little young to pipette, she enjoys accompanying her mum (Anna) to the lab on occasion. Anna has been on maternity leave since April, and will be back in the lab full time in January.

If you are headed to SfN, come check out our newest data on Monday, November 5th in the session “Defining Dysbiosis in Disorders of Movement and Motivation” 8:30 am, where Anna will be presenting our project examining opioid-induced gut dysbiosis and the causal relationship with opioid dependent behaviours.

The walls have arrived, and we’re starting to look like a functional lab. Our first team of undergraduate students have been working hard at unpacking boxes and organizing chemicals.